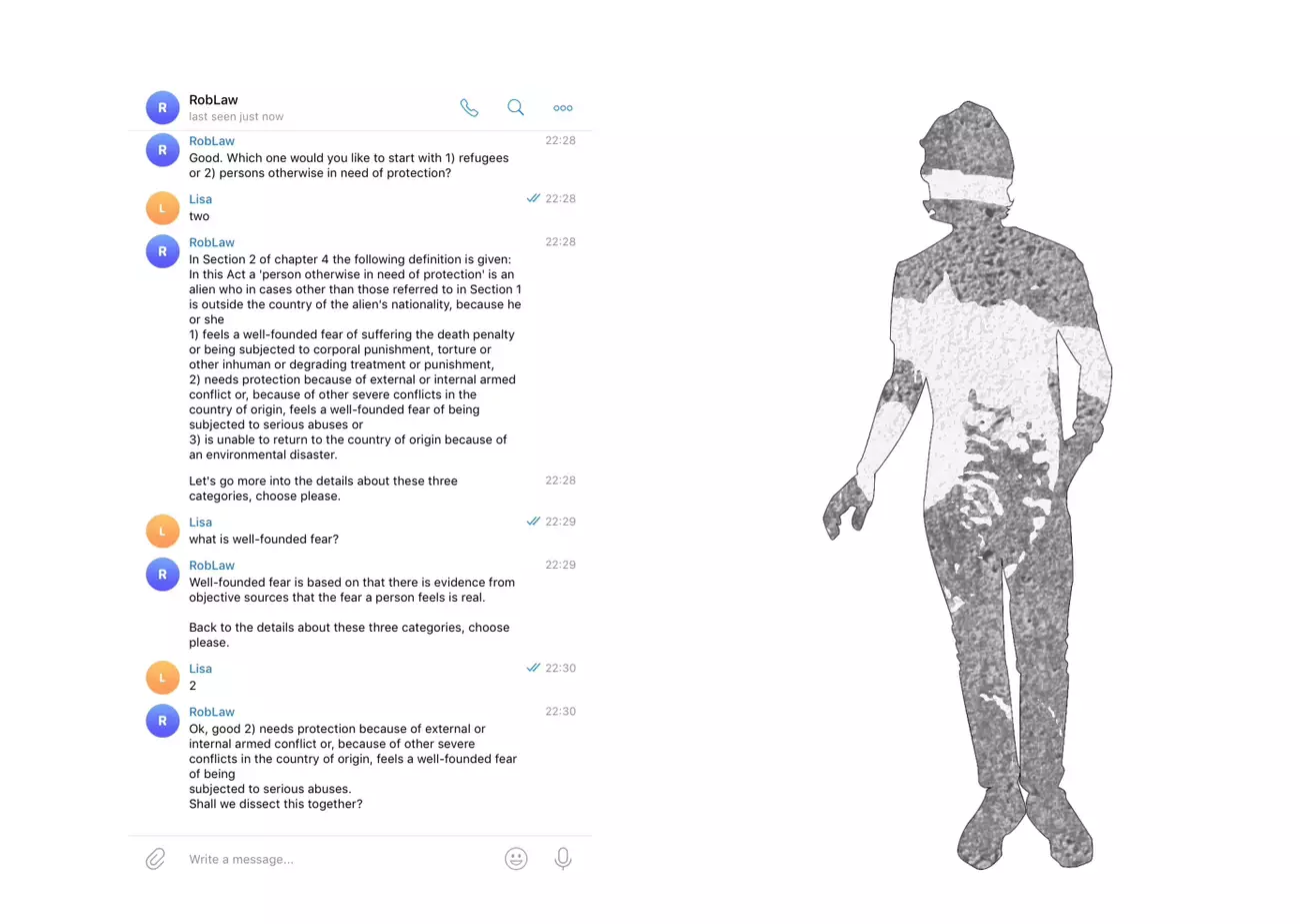 Rob Law (2018) is Studio Alight’s exploration to the question: How might an asylum seeker move through the paragraphs of Swedish law towards his/her residency permit.

This particular exploration manifested itself in a chatbot prototype that explores the paragraphs of the law, Aliens Act (2005: 716, Chapter 4 & 5) and the need to understand the power play between particular words in each of the lines in the law. This understanding can be useful to two main user groups. The first are the asylum seekers who need to understand the Eurocentric norms they are faced with as they navigate their paperless situation between the time that they land in Sweden and are given the decision by the Swedish Migration Authorities. Then, the second, is the uninformed or the not-schooled-in-immigration-law-citizens of Sweden for whom this artwork informs and educates.

As this page demonstrates the chatbot establishes itself as a persona of a young lawyer, Rob Law, an idealistic continuous learning being who converses with those who want to know more about the road to the decision. He embodies the greys in-between the black and white words written in the paragraphs of the law.

Rob chats inside the online chat tool called Telegram, as this is the best option found to be encrypted and safe for those interacting with this robotic lawyer figure. It is seen as the trusted source for the paperless as they travel to their new start. Rob, also, is an inquiry into new backend chatting technologies, with the help of our friends at talkamatic.se and is an early attempt to prototype a law chatbot using natural dialoging technique.

This exploration has given us many more questions than answers. Although, we are interested in creating a way to automate some answers an educated lawyer may be able to answer in a face-to-face conversation we also, quite admittedly, run into the problem of dehumanizing the relationship that could more easily happen in the face-to-face scenario. Yet, the face-to-face interactions between lawyer and client are riddled with power struggles and class disparities. Therefore, we leave this exploration with a set of new questions: Is it possible to empathize through these technologies? And where is the line between the aesthetics and ethics when automating a conversation?

This piece was created in collaboration with Anton Svensson and produced by ICIA.