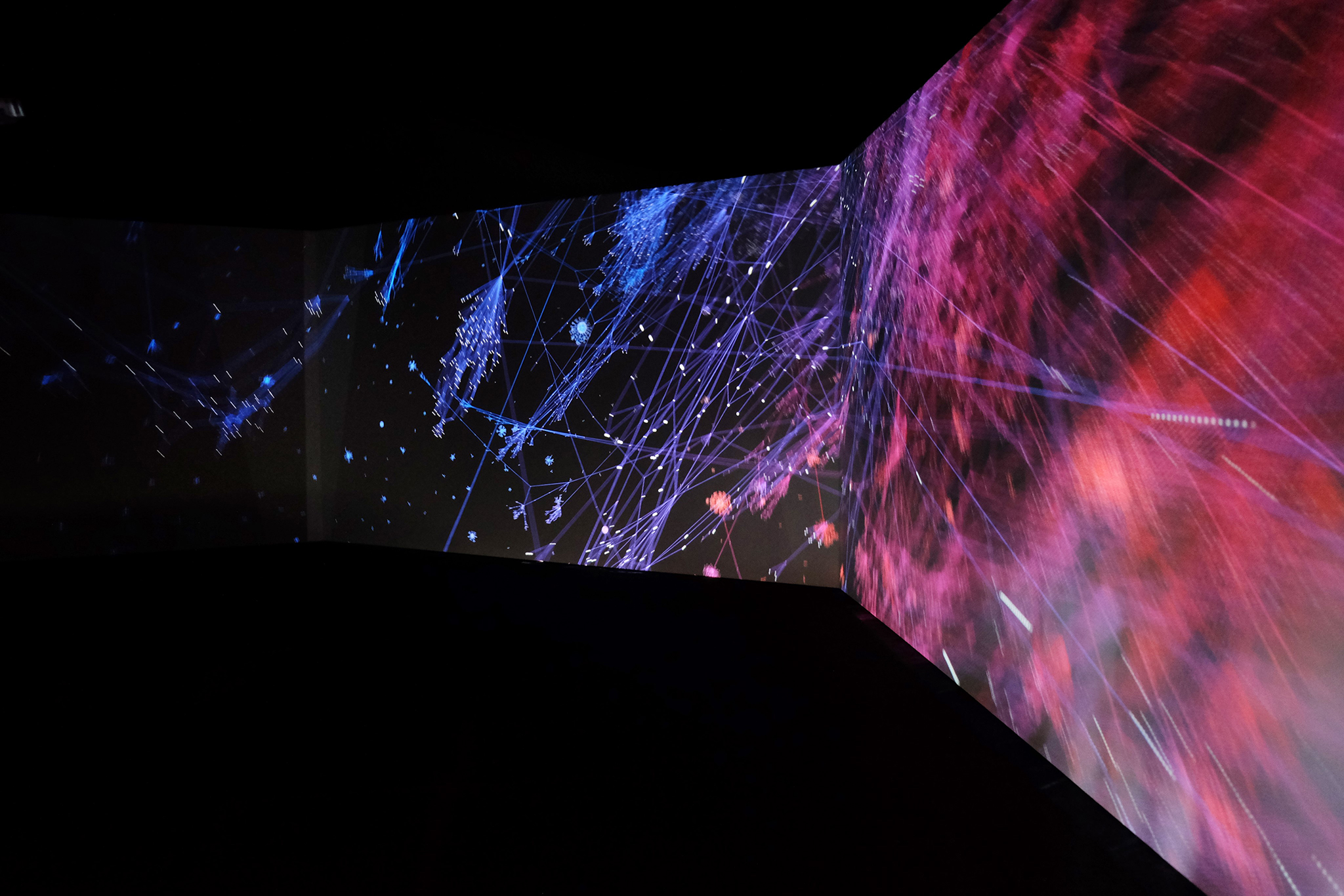 Space of Law is a visualisation of the connections between the paragraphs of the law of Sweden. It provides an understanding of these connections between the lines that fills the law books and is an experience that alights the gravity of the connections between the paragraphs. While navigating inside the law of Sweden enables the audience to navigate their own way through the paragraphs and exposes the complexity in its construction. The bodily experience of this artwork indicates the potential of aesthetics displacing subjective positions and previous understandings. While the online version enables the positioning to flip from those who have studied and those who can afford, to a position whereas, the users – or citizens – can unmask the coded paragraphs and begin to see these classifications as being more than just the ignorable fine print.

Eager to fly yourself? We encourage you to take the Space of Law into your own hands on your mobile or desktop devices by going here.

Space of Law was produced by ICIA for the Rob Law Exhibition. Scroll below for a text written by Charlotta Kronblad, lawyer and researcher of the digitalization of the law at Chalmers University, Gothenburg. This piece was critically reviewed by Sara Arvidsson of the Göteborg Post on 31 Aug 2019 (link).

by Charlotta Kronblad, lawyer and researcher of the digitalization of the law at Chalmers University, Gothenburg.

The law is central for a functioning society. But what is the law? Is the law merely a book of rules that we should follow? Or can we understand what the law is or should be, in another way? While this piece of art: ”Space of Law”, expands in front of our eyes we develop new mental points of departure, from which we can see, and question, the nature of law and its function, in a modern digital context.

From a legal perspective we can define the law as a system of rules that the citizens of a country (or the members of another group) acknowledge as legitimate. As citizens acknowledge and accept the law, it steers their behavior and provides the executor with monopoly over the power to punish any breaches of law. To execute legal power is the basis of the rule of law, which is a key pillar of modern democracy. In democracies, the content of the law is decided by the norms that are agreed upon by the majority of its citizens. The law is therefore changing over time. When the norms in society change, so will the law. To protect minorities, and to avoid being influenced by temporary popular movements, the systems often institutionalizes constitutional protection. In Sweden this is manifested in constitutional law that protects certain freedom and rights. These cannot be amended as easy, or fast, as the other laws. The rule of law therefore has a conserving effect, that calls for hesitation and reflection.

The role of art in society is often the opposite. Art can adorn but also challenge. Art can be provocative, drive societal progression and move positions forward. Therefore, law and art are not often combined or understood together. The Space Law is, consequently, completely unique. This piece brings us on a journey into the world of law, a journey where the law is transformed from text into a three-dimensional context, where we gain new perspectives that open our minds for new possibilities. Suddenly we are able to ask new questions about the law and the relations between different pieces of text. The legal galaxy also makes the legal scope and complexity visible, showing that it has become almost impossible for citizens to grasp the content of it. The complexity creates a distance to the law, that becomes problematic as the citizens cannot understand the content. The rule of law builds on trust, but how can we trust a system that we cannot grasp or comprehend?

By using digital technologies to combine art and law, the artists enable totally new questions. When the law is not spatially restricted new possibilities emerge as of how to regard and use it. In times of mass migration and digitalization, where both material and immaterial borders disperse, it is possible that we might need to understand and apply nationally based territorial legislation in novel ways. To dare to consider this, is not only important but also urgent. Because the fact is, that we live in an increasingly complex world where global changes, technological progress and alternative systems of government challenges the rule of law as the optimal one. Contemporary western democracies, based on the nationalistic rule of the people under the law, may not be forever. To build vital and ethical environments for human co-existence moving forward we might need to think in new ways about dynamic network of relations and norms and a development of the rule of law. This piece of art enables such thinking. With art as the mediator it is suddenly possible to question the two-dimensional nature of law and awake thoughts about the nature and future of the rule of law.