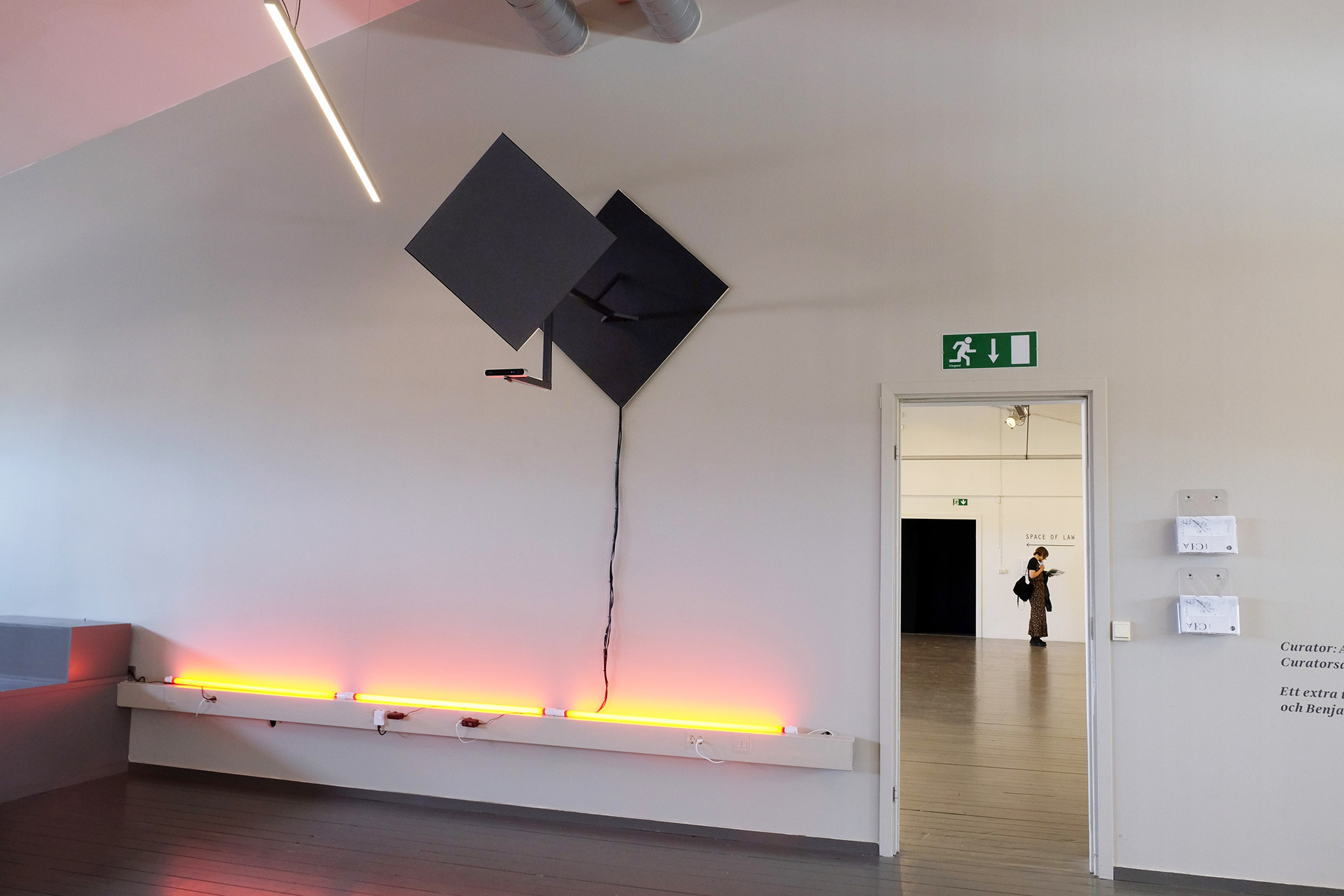 [Self] Confidence reveals an experience where the viewer uniquely feels the tension between the dangers of been seen and the dangers of not being seen. In her book The Age of Surveillance Capitalism, the theorist Shoshana Zuboff argues that the goal of the surveillance capitalist is to change us. This entails that what is at stake is our agency in how we behave, how we choose, how we connect, how we vote… they capitalize on our experiences. This is a far cry from the exploitation of our labor. [Self] Confidence tells us, in confidence, what it has seen. And thus, gives the viewer the power to reflect with an individualized, and even an emotional, response to the limitations of the systems that surveils us.

[Self] Confidence was produced by ICIA for the Rob Law Exhibition. This piece was critically reviewed by Sara Arvidsson of the Göteborg Post on 31 August 2019 (link).

This piece was built as a reflection on the fact that Surveillance Capitalists (Zuboff 2014), such as Mark Zuckerberg (Facebook) and Jeff Bezos (Amazon) are capitalizing on our every movement. Our moments of connecting with our families, our moments of searching our medias sleeplessly, and the moments of our everyday experiences - these collectively made moments are being capitalized upon by a mere few.

To describe the work simply, this work maps the space, and, then, uses one neural network to identify humans with a “confidence score” and a second neural network to classify that human (and what it sees in the image surrounding the human). It is an interactive sculpture installation that consists of directional speakers, stereo cameras, servos, a Jetson Nano, trained neural networks, metal work and other mixed media. Technologically, this work to come alive uses code as an artistic medium and in particular it uses algorithms and machine-learning (a.k.a. artificial intelligence, neural networks). It also uses the stereo camera, to map the space in real-time. The algorithms used are an object recognition algorithm, called YOLO – You Only Look Once, and an image classification algorithm called Googlenet, trained on the ImageNet database.

The piece tells the secrets that are usually kept from us in the seemingly alternative universe, the Internet. The sound enters the space via a directional wave and thus, the others in the room cannot hear its whispers if it is not pointed directly at them. [Self] Confidence even reveals the added element of its confidence score, meaning how confident did it read the image, or how confident is the machine at its chosen classification. This confidence score will undoubtedly become an evidential element in a future court case, and/or future regulatory policy because, for example, just how confident does a self-driving car need to be?

Furthermore, the finissage of the exhibition, Rob Law, which included this piece was a co-curated event by ICIA, Studio Alight and in collaboration with the Business Design Lab, HDK with guest lecturer David Carroll from Parsons, The New School, NYC. Carroll came and revealed the behind-the-scenes of the documentary The Great Hack, his research, and his experience suing the U.K. Government for his personal US voter data, due to the Cambridge Analytica scandal in the 2016 US Election. Like the documentary, and the work of Carroll, the piece [Self] Confidence aimed to give an audience the experience and understanding that there are consequences to allowing the surveillance capitalists reign ungoverned.